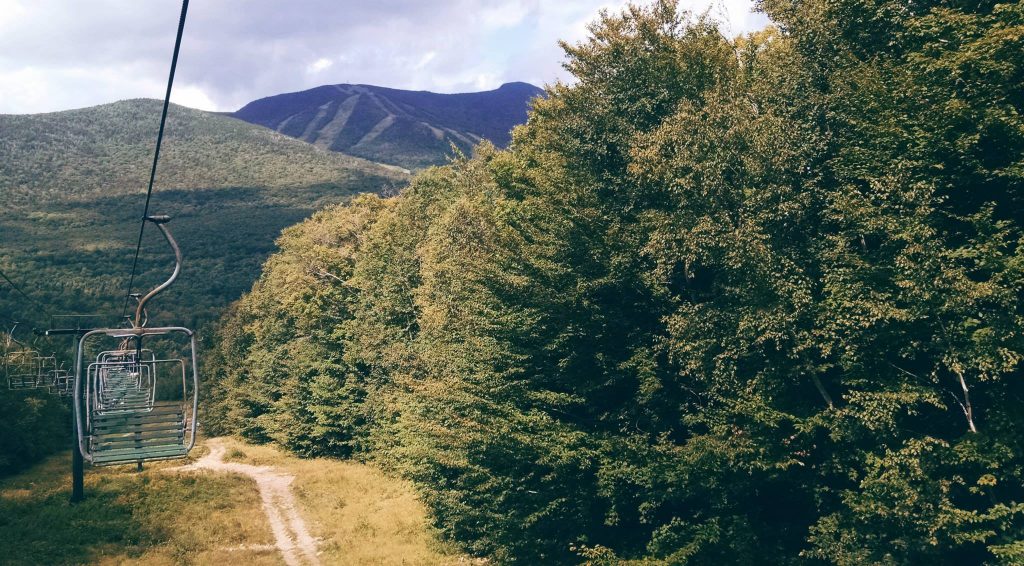 Had a great birthday (one day late, but better weather!) mountain biking with Greg. We didn’t even have to pedal up the hill because there was a ski lift…ooh la la!

I like the red light district best during the daytime. There are fewer distractions, fewer Neanderthals walking around. The way some of these men look at the girls is disgusting, and it’s hard for me to focus. The feeling of the oldness of Amsterdam is pervasive during the day, even here. Only the color coming from the windows betrays the goings-on indoors. They look fake, like painted red rectangles with baskets full of red flowers beneath, slapped onto the facade of a common residence.

The girls look happier during the day. They’re working, but they’re less formal, they’re joking with each other. I like that. They feel more approachable. This one looks like she’s about to head for the beach, but I know she’s not. Her red bikini has never seen salt. I keep walking, cogitating over whether she’s the one, but I think that a red bikini is just a bit too much red. The next one is better. She has some cellulite, and she’s wearing a black bra and panties with white go-go boots. I can see the slightest bit of her stockings above the tops of the boots, which seems like a bit of a faux pas to me. She’s also a little too old and a lot too tall.

As I continue walking, disgust sinks to my throat. I’m not sure why the girls are looking at me that way, as if I’m some sort of animal with my mouth frothing, ready to come as soon as they hair-toss and hip-swivel. How they can’t see how ridiculous they look is beyond me, really.

Finally, after wandering down to the end of the district, I come upon the right one. She’s dressed for success in a pair of short athletic shorts and midriff white tank top, and she’s eating ice cream. She doesn’t even look at me as I pass once, then twice. The third time I walk by, I manage to catch her eye as she looks up, prodding her eyelashes into submission with her pinky nail. She sums me up quickly, and gives me a smile. All the encouragement I need…

My sex life back home is pretty plebeian, really. I’ve had a few girlfriends, all duds. When I first meet a new girl, their quirks are indescribably attractive. Like I had this one girl who was such a sloppy eater. The first time we went out, she ordered linguine with clam sauce, and I couldn’t stop staring at the way the pasta would hang out of her mouth, sauce dripping in splatters, until she bit it and let the excess fall back onto the plate. It was a major turn-on for me, and the first night with her was monstrous. When we went out for breakfast the next day, she ate her eggs benedict in about three minutes, and I could barely contain myself. I took her back to my apartment, where we stayed for the next 72 hours. While she was gathering her stuff, she said that things had gotten weird, and I didn’t see her again.

My longest relationship so far was two months or so. The girl refused to wear matched socks and ate baby food out of the jar in lieu of meals. (To be fair, she did eat one actual meal a day.) She said that it was really too much of a pain to match and fold socks, so she threw all of them in a drawer and picked two at random every day. When I asked her why she didn’t buy all the same socks, she stared at me blankly. “I like stripes and polka dots and stuff.” Looking back, that was probably the beginning of the end. I’m all for quirks, but really, they should at least make sense.

We went to a party one night where she got so drunk that she started speaking in some kind of pidgin German. I don’t speak German, but even I could tell that she was blathering nonsense. Lots of guys were starting to circle her, and it was all I could do to keep close enough to fend them off. I had to literally drag her from the party, and by the time we got to her house, she was really riled up, pushing me, and asking why didn’t I pay more attention to her. I told her I paid attention to her all night — that I had to, or she would have slutted off with some cologne-smelling hair gel-wearing ex-frat boy. She didn’t like that.

“Slutted off? That’s not even a word, and at least they were looking at me! You always look just over my head, and you think I can’t tell, but I can.”

Over your head? It’s not only my eyes that go over your head, you two-bit slut. You can’t understand a single thing I think, say, or do. My music sounds like noise to you, because you’re too stupid to hear it. And that, as they say, was that.

I came to Amsterdam after spending two weeks in Vienna. Being in the place where the greatest music of all the ages was swaddled, raised, and released into the wild was incredible. People listen there, composers are heroes to them. The biggest stones in the cemeteries are not for actors, or businessmen, but for composers. I had a near-sexual experience watching a young woman standing at Mozart’s grave at St. Marx cemetery. She had tears in her eyes…tears! It was like the world suddenly bloomed into a place that made sense, where people appreciated the value of great art, where people didn’t cry over Elvis’s grave, but Mozart’s. I wished I spoke German, but what can you say at a moment like that anyway?

When she left, I discreetly followed her for a few dozen blocks. What would someone do after a moment like that? I had to know. At first I thought she might be going to Belvederegarten, the park where I had done some people-watching earlier in the day, but she turned right at the park and headed to the University of Music and Performing Arts. Imagine, sharing the halls with the ghosts of Wolf, Mahler, and Brahms! I followed her all the way to the giant glass doors in the front, but I couldn’t go any further without her seeing me, so I turned around, defeated and unfulfilled.