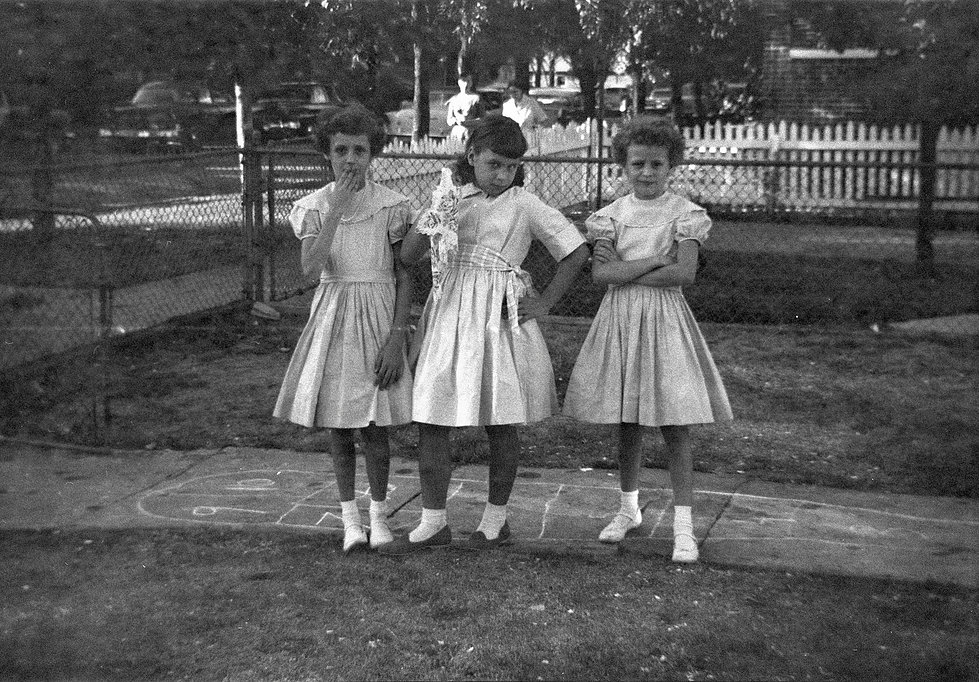 The sketch below was inspired by an incredible set of photos unearthed and processed by the Rescued Film Project. A photographer and, presumably, father in the 1950s shot and archived over 1200 rolls of photos that he never developed. No one knows who he is. In particular, the photograph above is the source material for the sketch.

My daddy never told us we were supposed to smile for pictures. I guess if you were to find all those pictures he took of us, you’d think we were pretty unhappy kids. I wonder whatever happened to those pictures. When Daddy died, we never found them, nor the film. It was like he never took them. But he was never without that camera, always in our face, or him taking pictures of himself in the mirror.

I remember one day, my sister Lisbeth and my cousin Rhoda and I drew a hopscotch game on our front sidewalk. I was excited because my cousin Rhoda was visiting. Daddy and her daddy were brothers, but they didn’t get along too well. Uncle John was famous. He owned the local Ford dealership, and even had his picture in advertisements in the paper. One time, Rhoda was in an advertisement too. So you can understand why Lisbeth and I were excited. I guess we hoped some of Rhoda’s chic would rub off on us.

I don’t know where my little sister or brothers were off to that day, but it was just the three of us older girls playing hopscotch. That was fine with us, as it meant the game wouldn’t be interrupted by pushing, stupid jokes, water balloons, and the like. We wanted to be left alone, but Daddy thought it was a good idea to “document, Peaches. Always document.”

He would have us stand still and look at the camera, but he never told us what to do, so we had to guess. Nobody else’s daddy took so many pictures. Rhoda, as was her wont, knew exactly what to do. She looked through the camera at my daddy like she was…older. And he smiled at her harder than Lisbeth and me.

“Uncle Paul, get one of me on the stairs!”

She giggled, running to the top of our stoop, draping herself backward, catlike over the iron railing. I wondered if she might hurt her back. Lisbeth just looked scared.

“That’s a nice one, Rhoda. You really like the camera, don’t you hon? You’re about as professional as they come.”