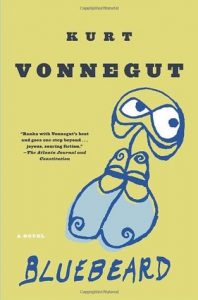 ▪ The entire planet can get along nicely now with maybe a dozen champion performers in each area of human giftedness. A moderately gifted person has to keep his or her gifts all bottled up until, in a manner of speaking, he or she gets drunk at a wedding and tap-dances on the coffee table like Fred Astaire or Ginger Rogers. We have a name for him or her. We call him or her an exhibitionist. How do we reward such an exhibitionist? We say to him or her the next morning, Wow! Were you ever drunk last night!

▪ The orgastic moment for me is when I hand a manuscript to my publisher and say, ‘Here! I’m all through with it. I never want to see it again,’ she said.

▪ But don’t you think all this frankness has also caused a collapse of eloquence? I reminded her of the cook’s daughter’s habit of referring to anybody she didn’t like for whatever reason as an asshole. I said: Never did I hear Celeste give a thoughtful explanation of what it was that such a person might have done to earn that protological sobriquet.

▪ The whole point of war is to put women everywhere in that condition. It’s always men against women, with the men only pretending to fight among themselves. (This conversation is the most important in the book)

▪ She, too, thought him a weakling and a fool, but forgave him that since they lived so well and he was so nice to her. He had the most amusing and kind and nattering things to say to me. He really enjoyed my company. We both loved to dance and dance. (suddenly changes to her voice)

▪ After all that men have done to the women and children and every other defenseless thing on this planet, it is time that not just every painting, but every piece of music, every statue, every play, every poem and book a man creates, should say only this: ‘We are much too horrible for this nice place. We give up. We quit. The end!’

▪ So when people I like do something terrible, I said, I just flense them and forgive them. Flense? he said. What’s flense? It’s what whalers used to do to whale carcasses when they got them on board, I said. They would strip off the skin and blubber and meat right down to the skeleton. I do that in my head to people — get rid of all the meat so I can see nothing but their souls. Then I forgive them.

▪ We were standing on the rim of a beautiful green valley in the springtime. By actual count, there were five thousand, two hundred and nineteen people on the rim with us or down below. The largest person was the size of a cigarette, and the smallest a flyspeck. There were farmhouses here and there, and the ruins of a medieval watchtower on the rim where we stood. The picture was so realistic that it might have been a photograph. Where are we? said Circe Berman. Where I was, I said, when the sun came up the day the Second World War ended in Europe. (In the last room)