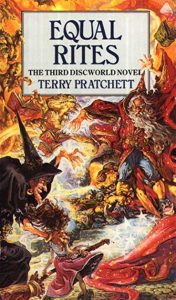 A wizard can, if he’s good enough, put flesh on his imagination. This wouldn’t cause any trouble if it wasn’t for the fact that the little circle of candlelight loosely called “the universe of time and space” is adrift in something much more unpleasant and unpredictable. Strange Things circle and grunt outside the flimsy stockades of normality; there are weird hootings and howlings in the deep crevices at the edge of Time. There are things so horrible that even the dark is afraid of them.

It was also changing color, starting with a dull red and then climbing through the spectrum until it was a painful violet. Snakes of white fire coruscated along its length. (There should be a word for words that sound like things would sound like if they made a noise, he thought. The word “glisten” does indeed gleam oilily, and if there was ever a word that sounded exactly the way sparks look as they creep across burned paper, or the way the lights of cities would creep across the world if the whole of human civilization was crammed into one night, then you couldn’t do better than “coruscate.”)