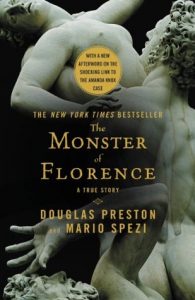 The Monster of Florence

In order to avoid making mistakes the postman had obviously memorized that phrase with which he answered almost every question, whether relevant or not. “Eravamo compagni di merende,” he kept repeating, “We were picnicking friends.” We were picnicking friends. With those words, the unfortunate postman invented a phrase that would enter the very lexicon of the Italian language. Compagni di merende, “picnicking friends” is now a colloquial expression in Italian referring to friends who pretend to be doing something innocent when in fact they are bent on dark, murderous misdeeds. The phrase became so popular that it even has its own Italian Wikipedia entry. “We were picnicking friends,” Vanni continued to repeat after every question, his chin dipping, his eyes squinting about the vast courtroom.

I began to feel that the very incomprehensibility of evil might be, in fact, one of its fundamental characteristics. You cannot stare evil in the face; it has no face. It has no body, no bones, no blood. Any attempt to describe it ends in glibness and self-delusion. Maybe, I thought, this is why Christians invented the devil and Monster investigators invented a satanic sect. They both were, as the poem goes, “some kind of solution.”

He dug out his notes of the session where Brother Galileo spoke about evil and read them to me. The old monk began by making a powerful play on words of the fact that the Italian word for “evil” and “sickness” is the same, male, and that the word for “speech” and “study” is also the same, discorso. “ ‘Pathology’ can be defined as discorso sul male [study of sickness (or evil)],” Brother Galileo said. “I prefer to define it as male che parla [evil (or sickness) that speaks]. Just so with psychology, which is defined as the ‘study of the psyche.’ But I prefer ‘the study of the psyche struggling to speak through its neurotic disturbances.’ “There is no longer true communication among us, because our very language is sick, and the sickness of our discourse carries us inevitably to sickness in our bodies, to neurosis, if not finally to mental illness. “When I can no longer communicate with speech, I will speak with sickness. My symptoms are given life. These symptoms express the need for my soul to make itself heard but cannot, because I don’t have the words, and because those who should listen cannot get beyond the sound of their own voices. The language of sickness is the most difficult to interpret. It is an extreme form of blackmail which defies all our efforts to pay it off and send it away. It is a final attempt at communication. “Mental illness lies at the very end of this struggle to be heard. It is the last refuge of a desperate soul who has finally understood that no one is listening or ever will listen. Madness is the renunciation of all efforts to be understood. It is one unending scream of pain and need into the absolute silence and indifference of society. It is a cry without an echo. “This is the nature of the evil of the Monster of Florence. And this is the nature of the evil in each and every one of us. We all have a Monster within; the difference is in degree, not in kind.”

Perhaps, some of my Italian colleagues demurred, I didn’t understand Italy well after all, as this was the sort of thing Italian journalists did all the time. They viewed my outrage as naïve and a bit gauche. To be outraged is to be earnest, to be sincere—and to be a dupe. Some Italians were quick to strike the pose of the world-weary cynic who takes nothing at face value and who is far too clever to be taken in by Spezi’s and my protestations of innocence.

You see, Douglas, an Italian must always appear to be furbo. You don’t have an English equivalent for that marvelous word. It means a person who is wily and cunning, who knows which way the wind is blowing, who can fool you but never be fooled himself. Everyone in Italy wants to believe the worst of others so they don’t end up looking gullible. Above all, they want to be seen as furbo.”

Above the building’s grand entrance stands a statue of a woman in robes, sword clasped in her hands, beaming an enigmatic smile at all who enter; the inscription below identifies her as IUSTITIAE VIRTUTUM DOMINA, Ruler of the Virtue of Justice. She is flanked by two griffins, symbols of Perugia, grasping in their claws a calf and a sheep.