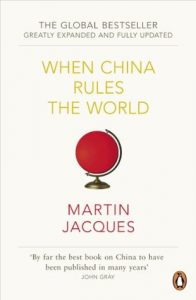 When China rules the world: the rise of the middle kingdom and the end of the western world

◆ Chapter 1 – The Changing of the Guard

▪ The neo-conservatives chose to interpret the world through the prism of the defeat of the Soviet Union and the overwhelming military superiority enjoyed by the United States, rather than in terms of the underlying trend towards economic multipolarity, which was downplayed.

▪ Failing to comprehend the significance of deeper economic trends, as well as misreading the situation in Iraq, the Bush administration overestimated American power and thereby overplayed its hand, with the consequence that its policies had exactly the opposite effect to that which had been intended: instead of enhancing the US’s position in the world, Bush’s foreign policy seriously weakened it. The neo-conservative position represented a catastrophic misreading of history.

▪ In Part I, I will discuss more fully the nature of modernity, arguing that rather than there being a single way of being modern, we are witnessing the birth of a world of multiple and competing modernities. This will be a quite new and novel feature of the twenty-first century, ushering in an era of what I characterize as contested modernity.38

▪ The mainstream Western attitude has held that, in its fundamentals, the world will be relatively little changed by China’s rise. This is based on three key assumptions: that China’s challenge will be primarily economic in nature; that China will in due course become a typical Western nation; and that the international system will remain broadly as it now is, with China acquiescing in the status quo and becoming a compliant member of the international community. Each of these assumptions is misconceived. The rise of China will change the world in the most profound ways.

▪ it is striking how relatively little East Asia has, in fact, been Westernized,

▪ four key themes, each rooted in Chinese history, which mark China as distinct from the West and which, far from being of diminishing significance, are likely to exercise an increasing influence over how China both sees itself and also conceives of its place and role in the world

▪ In the first place, China should not be seen primarily as a nation-state but rather as a civilization-state.

▪ China has a different conception of race to that held by the other most populous nations, notably India, Indonesia and the United States, which acknowledge, in varying degrees, that they are intrinsically multiracial in character. It is self-evident that a country as vast as China, comprising a fifth of the world’s population, was originally composed of a huge diversity of races. Yet the Han Chinese, who account for around 92 per cent of the population, believe that they comprise one race.

▪ The Chinese attitude towards difference will be a powerful factor in determining how China behaves as a global power.

▪ East Asia – was organized on the basis of tributary relationships which involved neighbouring states acknowledging China’s cultural superiority and its overwhelming power by paying tribute to the Middle Kingdom (which is the Mandarin Chinese name for China, namely Zhōngguó) in return for benevolence and protection. The tributary system, as it was known, fell victim to the colonization of East Asia by the European powers, and was replaced by the Westphalian nation-state system. Is it possible that the tributary system could return to the region?

▪ the most single important characteristic of China concerns its unity.

▪ The result is a single country that is home to a huge slice of humanity. This profoundly affects how it sees the rest of the world as well as providing it with – potentially at least – exceptional power.